Though Masonic Homes Kentucky recently celebrated its sesquicentennial, at least one inhabitant on the verdant Louisville Campus has been around much longer than that. On the east side of campus, behind Davies Hall, towers a 250-year-old Slippery Red Elm (Ulmus rubra). At more than 90 feet tall with the crown spread of 83 feet, this tree is the largest of its species in the country.

From the first time Donna Hibbs, vice president of grounds and landscaping, laid eyes on the massive tree, she knew it was something special. Despite its massive size and impressive distinction, Hibbs says the tree is fairly low maintenance—deep-root feeding, weeding and mulching at the base, plus the occasional maintenance pruning, are all that is needed to keep the tree healthy.

Hibbs says the tree has emerged from the Super Outbreak of tornadoes in 1974, the Blizzard of 1978, and countless other wind and ice storms largely unscathed, save a few broken branches here and there. “After every storm, we come in here holding our breath, but it’s always made it through.” 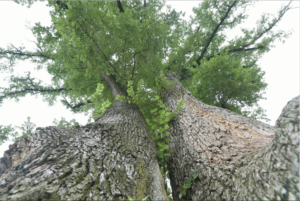